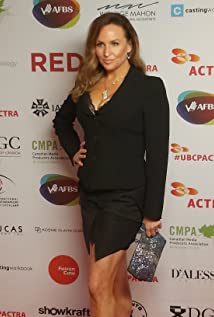 Award-winning film & television actress April Telek was born and raised in North Vancouver, British Columbia. After landing her first modeling gig at the age of ten, April quickly realized her love for the camera, and while growing up as a child actor and international model, April was enrolled in a "Super Achievers" program designed specifically for kids with professional careers in school. Upon graduation, she decided to commit herself full-time to "the craft" and hasn't stopped working since.In 1994, April went on to win the title of "Miss Canada", which took her to 17 international competitions, including "Miss Asia Pacific" in the Philippines, and "Miss Top Model of the World" in Istanbul, Turkey. She has also had the honor of being titled "Hottest Canadian Talent" on the web and was voted "First Wave Babe of the Month" on more than one occasion.April's longevity as a film and television actor has led her to work on numerous projects over the years. She has worked with some of Hollywood's top A-List talent in feature films such as Mr. Troop Mom (2009) (George Lopez, Jane Lynch), Gray Matters (2006) (Heather Graham, Molly Shannon), and White Noise (2005) (Michael Keaton), just to name a few. April's television credits include a recurring role as "Nell" on AMC's highly-anticipated Hell on Wheels (2011), and co-starring in CTV's Canadian hit show, Robson Arms (2005), for the last two seasons as "Sasha". Her most recent television appearances include Hallmark Hall of Fame's Duke (2012), Disney's Radio Rebel (2012) (aka "Shrinking Violet"), as well as being featured, along with her beautiful home, on MTV Cribs (2000).Some of the roles April is most proud of include A&E's Emmy Award-winning MOW, Flight 93 (2006), where she played "Liz Glyk", the wife of one of the heroes/passengers on the ill-fated United Flight 93 that met its demise on September 11th, "Cathy Evelyn Smith" (the last person to see John Belushi alive), in Behind the Camera: The Unauthorized Story of Mork & Mindy (2005) (aka "The Mork & Mindy Story") for NBC, and most recently as "Jana" in Amazon Falls (2010), for which April won a number of awards.Despite her hectic schedule between acting and being a mom, April served as a director on the board for the Lions Gate Hospice Society for 3 years. She became passionate about the Hospice Society when her aunt was diagnosed with a terminal illness and passed away at St. James Cottage Hospice in Vancouver. April was very involved in the capital campaign to raise funds (over 7 million dollars) for the first free-standing hospice on the North Shore. April has also been involved with her church's outreach program for the Downtown Eastside and supports The Canadian National Institute for the Blind, Operation Smile and Canuck Place charities.April resides on the North Shore in her recently designed and renovated home with her husband, Jamie Campbell, and daughter, Ava Marie.