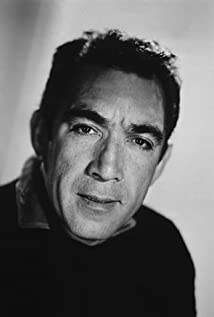 Anthony Quinn was born Antonio Rodolfo Quinn Oaxaca (some sources indicate Manuel Antonio Rodolfo Quinn Oaxaca) on April 21, 1915, in Chihuahua, Mexico, to Manuela (Oaxaca) and Francisco Quinn, who became an assistant cameraman at a Los Angeles (CA) film studio. His paternal grandfather was Irish, and the rest of his family was Mexican.After starting life in extremely modest circumstances in Mexico, his family moved to Los Angeles, where he grew up in the Boyle Heights and Echo Park neighborhoods. He played in the band of evangelist Aimee Semple McPherson as a youth and as a deputy preacher. He attended Polytechnic High School and later Belmont High, but eventually dropped out. The young Quinn boxed (which stood him in good stead as a stage actor, when he played Stanley Kowalski in "A Streetcar Named Desire" to rave reviews in Chicago), then later studied architecture under Frank Lloyd Wright at the great architect's studio, Taliesin, in Arizona. Quinn was close to Wright, who encouraged him when he decided to give acting a try. Made his credited film debut in Parole! (1936). After a brief apprenticeship on stage, Quinn hit Hollywood in 1936 and picked up a variety of small roles in several films at Paramount, including an Indian warrior in The Plainsman (1936), which was directed by the man who later became his father-in-law, Cecil B. DeMille.As a contract player at Paramount, Quinn's roles were mainly ethnic types, such as an Arab chieftain in the Bing Crosby-Bob Hope comedy, Road to Morocco (1942). As a Mexican national (he did not become an American citizen until 1947), he was exempt from the draft. With many other actors in military service during WWII, he was able to move up into better supporting roles. He married DeMille's daughter Katherine DeMille, which afforded him entrance to the top circles of Hollywood society. He became disenchanted with his career and did not renew his Paramount contract despite the advice of others, including his father-in-law, with whom he did not get along (whom Quinn reportedly felt had never accepted him due to his Mexican roots; the two men were also on opposite ends of the political spectrum) but they eventually were able to develop a civil relationship. Quinn returned to the stage to hone his craft. His portrayal of Stanley Kowalski in "A Streetcar Named Desire" in Chicago and on Broadway (where he replaced the legendary Marlon Brando, who is forever associated with the role) made his reputation and boosted his film career when he returned to the movies.Brando and Elia Kazan, who directed "Streetcar" on Broadway and on film (A Streetcar Named Desire (1951)), were crucial to Quinn's future success. Kazan, knowing the two were potential rivals due to their acclaimed portrayals of Kowalski, cast Quinn as Brando's brother in his biographical film of Mexican revolutionary Emiliano Zapata, Viva Zapata! (1952). Quinn won the Best Supporting Actor Academy Award for 1952, making him the first Mexican-American to win an Oscar. It was not to be his lone appearance in the winner's circle: he won his second Supporting Actor Oscar in 1957 for his portrayal of Paul Gauguin in Vincente Minnelli's biographical film of Vincent van Gogh, Lust for Life (1956), opposite Kirk Douglas. Over the next decade Quinn lived in Italy and became a major figure in world cinema, as many studios shot films in Italy to take advantage of the lower costs ("runaway production" had battered the industry since its beginnings in the New York/New Jersey area in the 1910s). He appeared in several Italian films, giving one of his greatest performances as the circus strongman who brutalizes the sweet soul played by Giulietta Masina in her husband Federico Fellini's masterpiece La strada (1954). He met his second wife, Jolanda Addolori, a wardrobe assistant, while he was in Rome filming Barabbas (1961).Alternating between Europe and Hollywood, Quinn built his reputation and entered the front rank of character actors and character leads. He received his third Oscar nomination (and first for Best Actor) for George Cukor's Wild Is the Wind (1957). He played a Greek resistance fighter against the Nazi occupation in the monster hit The Guns of Navarone (1961) and received kudos for his portrayal of a once-great boxer on his way down in Rod Serling's Requiem for a Heavyweight (1962). He went back to playing ethnic roles, such as an Arab warlord in David Lean's masterpiece Lawrence of Arabia (1962), and he played the eponymous lead in the "sword-and-sandal" blockbuster Barabbas (1961). Two years later, he reached the zenith of his career, playing Zorba the Greek in the film of the same name (a.k.a. Zorba the Greek (1964)), which brought him his fourth, and last, Oscar nomination as Best Actor. The 1960s were kind to him: he played character leads in such major films as The Shoes of the Fisherman (1968) and The Secret of Santa Vittoria (1969). However, his appearance in the title role in the film adaptation of John Fow

A Walk in the Clouds

Hercules in the Maze of the Minotaur

Arnold, the Man Behind the Muscle

Hercules in the Underworld

Hercules: The Legendary Journeys - Hercules and the Circle of Fire

Hercules: The Legendary Journeys - Hercules and the Lost Kingdom

Hercules and the Amazon Women