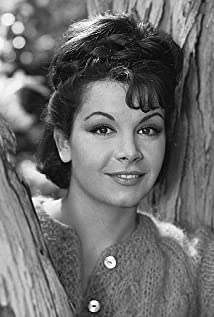 Annette Joanne Funicello achieved teenage popularity starting in October 1955 after she debuted as a Mouseketeer. Born on October 22, 1942 in Utica, New York, the family had moved to California when she was still young. Walt Disney himself saw her performing the lead role in "Swan Lake" at her ballet school's year-end recital in Burbank and decided to have her audition along with two hundred other children. Annette became the last Mouseketeer of the twenty-four that was picked. By the run-through in 1958 of The Mickey Mouse Club (1955) in which she appeared in her own multi-segmented series entitled "Annette", she had become the most popular Mousketeer of them all and the only one kept under contract by Walt Disney after he canceled the show. Her popularity was such that by the late 1950s, she was simply known as "Annette" -- America's sweetheart and the first "crush" for many a teenage baby boomer. Whenever anyone spoke of Annette, no last name was ever needed as everyone knew who you were talking about.The popular teenager became synonymous with wholesome entertainment and was borrowed by Danny Thomas in 1959 to play Gina, a foreign exchange student, on The Danny Thomas Show (1953) (aka "The Danny Thomas Show") and also that same year had a recurring role on the Disney television series Zorro (1957). She made her well as other Disney film vehicles for several years, including The Shaggy Dog (1959), Babes in Toyland (1961) and The Monkey's Uncle (1965). During this time, the modest young singer had a couple of hit singles on the "Hot 100" charts, notably, "Tall Paul", and as a result, traveled with Dick Clark's caravan on singing tours around the country. At one point, she and teen idol Paul Anka became an item and he wrote both "Puppy Love" and "Put Your Head On My Shoulder" with her in mind. Their busy careers led to them parting ways.During the early 1960s, American International Films wanted to use her in a fun-on-the-beach movie. They presented the idea to "Mr. Disney", as Annette always called him and with whom she was still under contract. To everyone's surprise, he gave his consent, with the only condition being that she make sure her navel was completely covered by a one piece bathing suit. The first movie, aptly titled Beach Party (1963) starred Robert Cummings and Dorothy Malone as the older generation who explore the younger set represented by Annette (as "Dee Dee") and her love interest Frankie Avalon (as "Frankie"). The "teenage" couple (actually she was 20 and he 23) proved so popular in this that they were whisked into a number of sand-and-surf romps (Muscle Beach Party (1964), Bikini Beach (1964), Beach Blanket Bingo (1965) and How to Stuff a Wild Bikini (1965)) that showcased the actors engaging in harmless fun while singing and dancing in the sand, and falling into silly slapstick.After the surfing craze died out in 1965, Annette married Jack Gilardi, Paul Anka's agent, and became the mother of his three children -- Gina, Jack Jr. and Jason. While appearing in a few other movies that did nothing to further her career, including Fireball 500 (1966), Thunder Alley (1967) and Head (1968), she appeared as a guest on shows and, most famously, became the spokesperson for Skippy Peanut Butter in a host of commercials. But she phased out her career in favor of family.She and Gilardi divorced in 1983. Three years later, she married Glen Holt, a harness racing horse breeder/trainer. Within a year into her second marriage, Annette was diagnosed with multiple sclerosis. She hid her condition for five years before making a formal announcement (in 1992) for fear that her uncontrollable movements might be characterized as drunkenness. She became the most famous spokesperson for the disease. Annette's life was filmed as a television movie with A Dream Is a Wish Your Heart Makes: The Annette Funicello Story (1995) co-starring her good friend, Shelley Fabares. Receiving a star on the Hollywood Walk of Fame in 1993, Annette was eventually wheelchair-ridden and went into complete seclusion.Following a tragic March 2011 incident in which their Los Angeles house burnt to the ground and both Annette and husband Glen were hospitalized with smoke inhalation, the couple moved to Bakersfield, California. A little more than a year later, and over 25 years after she was diagnosed with this long and painful illness, Annette passed away on April 8, 2013 from complications at age 70. To the present, her foundation continues to raise money to help find cures for this and other debilitating disorders, including Lou Gehrig's disease.

Live from the Space Stage: A HALYX Story

Back to the Beach

How to Stuff a Wild Bikini