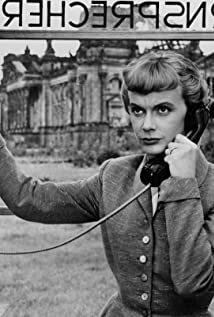 Anita Björk is able to use simple means to give depth and character to a role. She has a way of expressing any emotion just by raising an eyebrow or twitching her lips. This was something she used to a large extent in her best movie, Alf Sjöberg's Miss Julie (1951) where she played the young lady at a country manor, planning to elope with Jean the butler.She was bitten by the acting bug in her teens and went to Stockholm. She started her acting studies at the Royal Dramatic Theater in 1942 and quickly got major roles. Her breakthrough came 1948 in Jean Genet's 'The Maids', followed by such roles as Agnes in 'Henrik Ibsen's 'Brand', Julie in William Shakespeare's 'Romeo & Juliet', Eliza in George Bernard Shaw's 'Pygmalion' and Tintomara in 'Carl Jonas Love Almqvist''s 'Drottningens juvelsmycke'.She met and fell in love with the writer Stig Dagerman and in 1951 she gave birth to a daughter. The three of them went to Hollywood for Anita to negotiate a role in Alfred Hitchcock's I Confess (1953). But when word came out that Anita wasn't married to Stig, Hollywood lost interest. His divorce from his ex-wife wasn't final until 1953 and apparently it wasn't acceptable to Hollywood for a contract player to live with someone married to somebody else.In West Germany she played against Gregory Peck in Night People (1954) but when the movie failed at the box office, so did her career abroad. Also, her husband killed himself and Anita decided to stick to the Royal Dramatic Theater where she has appeared in more than 80 roles through the years. In movies, she has appeared mainly in supporting roles.Of her movies, the most interesting are Miss Julie (1951), On These Shoulders (1948) and Mannequin in Red (1958).

In the Presence of a Clown