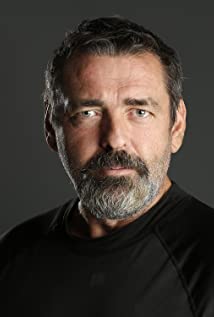 Best known as Robert the Bruce in Braveheart (1995), Angus McFadyen has enjoyed a fine career in the film business. He has been in a variety of different films and television shows over his life, playing such well known roles as Edward 'Blackbeard' Teach, Robert the Bruce, and Orson Welles.Born in Glasgow, Scotland on the twenty-first of September in 1963, Angus lived a colourful childhood, being raised in such places as the Philippines, Singapore, and France. Angus found himself back in Britain, however, when it came to education. He enrolled in the University of Edinburgh, and Central School of Speech and Drama in London.Angus' first role was the role of Philip in the film made for television, Great Performances: The Lost Language of Cranes (1991). The film centers on a young man (Angus) who must tell his parents that he is gay. Playing the role of his father was fellow Scottish actor Brian Cox. Angus then acted in the television film 15: The Life and Death of Philip Knight (1993) and also on the television show Takin' Over the Asylum (1994) which was about a salesman who runs a radio station in an institution. This led to the biggest role of Angus's career.In 1995, Mel Gibson's epic classic, Braveheart (1995) was released, with Angus in the role of Robert the Bruce. Next to the flamboyantly hero of William Wallace, Robert the Bruce was the human character, the man who wanted to make the right choice, but was drawn to compromise. The brilliant portrayal of the Bruce was sadly unnoticed by any awards, a tragic insult to Angus's brilliant performance.After Braveheart (1995) won Best Picture, Angus acted in the independent film Nevada (1997), before giving the most over-the-top performance of his career in the action/fantasy Warriors of Virtue (1997). While the movie was a disaster critically and commercially, Angus's performance as the demented villain Komodo is fondly remembered by a cult following to this day. Another role for Angus was in the romantic comedy Still Breathing (1997). Regrettably, none of these matched up to Braveheart (1995)'s success. He moved on to Joseph's Gift (1998) which starred Freddy Rodríguez. Angus also co-starred alongside such names as Don Cheadle and Ray Liotta when he played Peter Lawford in the HBO film The Rat Pack (1998).Angus also played the role of Orson Welles in Tim Robbins's third directorial film Cradle Will Rock (1999). Although the film received a nomination for the Palme D'Or at Cannes, it was a financial flop, but Angus rebounded with the Shakespearean film Titus (1999) which also featured Anthony Hopkins, Jonathan Rhys Meyers, Alan Cumming and Jessica Lange. Angus played the role of Lucius, eldest son of Titus Andronicus (played by Hopkins). Directed by Julie Taymor, who would go on to direct Across the Universe (2007), the film was a critical triumph and Angus delivered a solid performance, but with mediocre box office results. With the new millennium, Angus once again took up a very well-known character: the Greek God Zeus in Jason and the Argonauts (2000).After the noir film Second Skin (2000), Angus acted in a number of poorly received films. One such film was the action film Styx (2001) which starred Peter Weller. A year later, Angus acted in the comedy film Divine Secrets of the Ya-Ya Sisterhood (2002) alongside a number of famous names as Sandra Bullock, Ellen Burstyn, Maggie Smith, and Ashley Judd. The film was a commercial hit, albeit with mixed reviews. That same year, Angus took the role of Vice-Counsel Dupont in Equilibrium (2002). The film, also starring Christian Bale, Sean Bean, Taye Diggs, and Emily Watson, is about a world set in the future, where a Fascist regime forbids all emotions from being shown. The film, though clearly well-made and well-acted by all, did not get a wide release. It had already made a profit through international sales, and the studio chose to keep it a successful profit rather than risk a big release. Equilibrium (2002) has since gained a cult following, but at the time of its initial release, Angus moved on to act in the television series Miracles (2003) which was about the supernatural.After "Miracles", Angus acted as Marcus Crassus in a more historically accurate version of Stanley Kubrick's film Spartacus (1960), the character of Bill in "The Pleasure Drivers", and the lead in the dramatic film The Virgin of Juarez (2006). He then played the pirate warlord Blackbeard in a television film of the same name. The film received mixed reviews.What then emerged was the second role of MacFadyen's career: the role of Jeff Reinhart in Saw III (2006). Reinhart is a man obsessed with revenge, and he is led into a series of traps that test his ability to forgive. The film was a smash hit for its 10 million dollar budget, earning almost two hundred million dollars worldwide. Angus co-starred in the box office bomb Redline (2007) the same year as he returned to the "Saw" franchise with the fourth film. It was also a success at the

Purge of Kingdoms: The Unauthorized Game of Thrones Parody