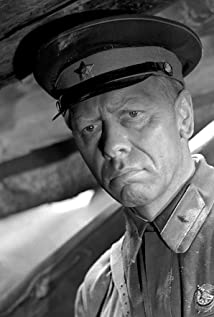 Anatoly Dmitrievich Papanov was born on October 31, 1922, in Vyasma, Smolensk region, USSR. His father, named Dmitri Filippovich Papanov, was a Russian industrial worker. His mother, named Elena Bronislavovna Roskovskaya, was of Polish ancestry. Young Papanov moved to Moscow with his parents in 1929. After graduation from a secondary school in 1939, he worked as a metal worker at the 2nd Moscow Ball-bearing Factory. There Papanov was an amateur actor at the Worker's Club Theatre-studio named "Kauchuk".In 1941 Papanov was drafted in the Red Army and served as an Artillery Sergeant. He was severely wounded in his legs in 1942, and spent six months in hospitals. At age 21, he became permanently disabled and used a cane for the rest of his life. Papanov was admitted to the acting class of the Moscow Theatre Institute (GITIS), from which he graduated in 1946. While a student, Papanov married his classmate actress Nadezhda Karataeva. From 1946-1948 he worked on stage at the Klaipeda Drama Theatre in Latvia. In 1948 Papanov was invited to the Moscow Theatre of Satire by director Andrei Goncharov. He became permanent member of the troupe and worked on stage for almost 40 years. His regular stage partners were Andrey Mironov, Tatyana Pelttser, Spartak Mishulin, Aleksandr Shirvindt, Mikhail Derzhavin, Vladimir Kozel, Olga Aroseva, Georgi Menglet, and other renown Russian actors.Papanov made his film debut as an extra in 'Lenin v Oktyabre' (1937) by director Mikhail Romm. He played supporting roles in comedies by director Eldar Ryazanov - 'Chelovek niotkuda' (1961), where his partner was Sergey Yurskiy, and in 'Beregis avtomobilya' (1966), where his partners were Innokentiy Smoktunovskiy, Oleg Efremov, Andrey Mironov, Georgi Zhzhyonov, Donatas Banionis, Evgeniy Evstigneev, and others. Papanov became really famous after his impressive work in the role of General Sepilin in 'Zhivye i myortvye' (1963), for which he was awarded the Brothers Vasilyev State Prize in 1966.Anatoli Papanov is best known for his roles in the comedies of director Leonid Gaidai. His satirical character - a gangster chief Lyolik in 'Brilliantovaya ruka' (The Diamond Arm, 1968) became one of the most popular characters in the Russian cinema. Papanov made an excellent acting ensemble with his film partners Andrey Mironov, Yuriy Nikulin, Nonna Mordyukova, Nina Grebeshkova, Svetlana Svetlichnaya, Leonid Kanevskiy, and other remarkable actors. 'Brilliantovaya ruka' was the all-time box-office leader with over 76,000,000 admissions in theaters of the Soviet Union. In a 1995 national poll in Russia, 'Brilliantovaya ruka' was voted the best Russian comedy ever.Anatoli Papanov was awarded the Russian State Prize of Brothers Vasilyev (1966). He was designated People's Actor of the USSR (1973) and was awarded the USSR State Prize (1989, posthumously). Papanov died of a heart attack on August 7, 1987, at his Moscow apartment, a few days before the tragic collapse of his friend and partner Andrey Mironov. Anatoli Papanov's death caused a considerable mourning among his fans in the Soviet Union, he was laid to rest in the Novodevichy Cemetery in Moscow, Russia.