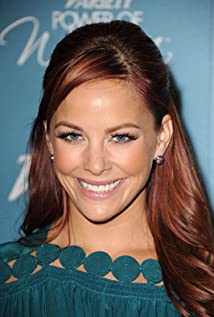 Amy Paffrath has a reputation for running full speed ahead with every project she works on. In fact, her mother Mary gave birth to her just nine minutes after arriving at the hospital. Not one to sit around and wait for opportunities, the young actress is quickly making a name for herself in the entertainment business.She was born in St. Louis by parents Mark and Mary Paffrath. She has six siblings: Christy, Mark, Steven, Stacey, Matt and Brittany.With modest means, the Paffrath pack learned to find inexpensive ways to entertain themselves. The energetic Paffraths put on plays and newscasts at family parties. To help her children creatively channel their energy, Amy's mom enrolled her in ballet, tap and jazz class when she was just 3-years-old. Young Amy loved to perform and was always excited to learn new steps. At 9, she entered gymnastics and won many awards and medals in competitions. In elementary school, Amy experimented with theatre and enlisted the help of her friends to put on plays.At St. Thomas-Aquinas Mercy High School in Florissant Mo, Amy first discovered her interest in TV. She began working in the media department both in front of the camera, on AM in the am, and behind the scenes, producing and editing. Amy signed with Toni's International Models in 1997. The agency helped her to book many local jobs, including runway shows and print ads for catalogs.Amy's interest in television, combined with her curiosity for people and places, made broadcasting a great fit. Amy's new agent, Kevin Long at The Edge Agency, steered her in the right direction and continued to get her jobs through college. As a University of Missouri Tiger cheerleader, Amy was featured in the Athlon, an athletic magazine. She also worked as a reporter and anchor for KOMU-TV and Emcee at Déjà vu Comedy Club. In the summer of 2004, Amy was ecstatic to learn she had landed two internships in LA: one at Entertainment Tonight (1981) and one at KNBC. She worked closely with Mark Steines, Mary Hart, Jann Carl and Bob Goen and grew enormously from the experience. Again, she wanted to stay in LA and start her career but with just one year left, she once again returned to Missouri. In 2005, Amy graduated from the University of Missouri with a BA in Broadcast Journalism and a minor in Textile and Apparel Management.In early 2006, Amy made her long-awaited leap from St. Louis to Los Angeles. From the moment she set foot in the City of Angels, Amy's career has been thriving. Immediately, she landed hosting gigs on two shows, "Created by U" and "In the Mix", both on Direct-TV (2006-2007). She completed 4 movies in 2006, Dinner at Eight (2007), Moonlight on Ivy (2006), Fly Kidz (2006) and Hauntsville (2016), of which she was the lead. In 2007, she landed gigs as the voice of channel 101 on Direct-TV, the host of Broadcaster News at www.broadcaster.com/thenews and the star of Paramore's #1 video on TRL "Misery Business".She is managed by Scott Karp and Erik Heintz at Insomnia Media Group.