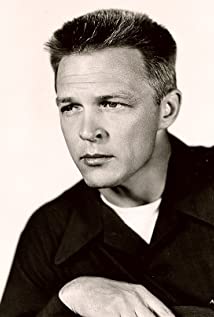 A regular "good guy" and "bad guy" presence in sagebrush sagas and two-fisted film action during the early 1950s, brawny, blond-haired Alexander Livingston Nicol Jr. was born in 1916 in Ossining, New York, the son of a prison warden there at Sing Sing, and his wife, the matron of a detention center. Alex developed an early interest in acting and originally trained at the Fagin School of Dramatic Art.On the professional stage from 1938, he soon found work as an apprentice to Maurice Evans. As part of the ensemble in his highly-regarded Shakespearean production company, he appeared on stage with the great actor in "Henry IV, Part I" (1939) and "Richard II" (1940) on Broadway. Following a stage role in "Return Engagement," his newly-found career was interrupted by World War II. Following his five-year stretch as a Tech Sergeant with the National Guard and Cavalry Unit, he became a student and eventual charter member of Lee Strasberg's Actors Studio. He also returned to Broadway in such shows as "Sundown Beach" and "South Pacific" (in the ensemble as a Marine). Other post-war stage plays included "Waiting for Lefty," "Forward the Heart" and "Mister Roberts," in which he took over Ralph Meeker's role (as the sailor Minnion) and served as understudy to Henry Fonda. The pinnacle of his Broadway career occurred when he replaced Ben Gazzara and received excellent reviews as Brick in "Cat on a Hot Tin Roof" in 1956.Alex's film career was launched when he was discovered by Universal-International director George Sherman, who cast him in a prime role in his film mystery The Sleeping City (1950) starring Richard Conte and Coleen Gray. He next appeared in Tomahawk (1951), the first of his many oaters, which starred Yvonne De Carlo, Van Heflin and an up-and-coming Rock Hudson. Continuing in the same vein throughout the early 1950s as both support player and occasional lead, he played an assortment of decent, law-abiding sheriffs and simpering, murdering gunslingers in such westerns as The Redhead from Wyoming (1953), his first co-starring role opposite Maureen O'Hara, The Lone Hand (1953), Law and Order (1953), Dawn at Socorro (1954), and his best film, The Man from Laramie (1955) in which he memorably menaced James Stewart. Outside the western genre he rolled out such outdoor/war pictures as Target Unknown (1951), Air Cadet (1951), Red Ball Express (1952) and Strategic Air Command (1955), the last mentioned also starring Stewart. He also top-lined a few British-made pictures during this 1950s time period.Television also brought Alex work with a number of appearances in such popular shows as "The Twilight Zone," "Dr. Kildare" and "The Outer Limits," among others. Unable to break free of his rugged secondary typecast, he also tried his hand at directing, his first being the semi-cult horror film The Screaming Skull (1958) in which he was a secondary character in a cast of five. He found more prolific directing offers on TV, notably the "Tarzan" series starring Ron Ely throughout the 1960s.In 1959, after receiving a major part in the Italian/Yugoslavian picture 5 Gemerkte Vrouwen (1960), Alex and his family transported themselves to Rome for a couple of years where he continued to film. Although they returned to the US in 1961, he would often show up in a European-made "spaghetti western" or two during the early 1960s. He appeared sporadically on TV and film into the next decade, his last feature being the extremely low-budget giant monster flick Ape (1976), about a 36 foot gorilla that terrorizes Korea, a film he agreed to do for his friend Paul Leder. Alex retired fully in 1987 and died in Montecito, California in 2001 at the age of 85, survived by long-time wife (since 1948), former actress Jean Fleming, and their three children (two sons and a daughter).

Woman in the Rain

A Matter of WHO