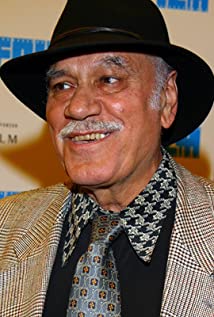 Prolific, versatile, and ubiquitous character actor Aldo Sambrell was featured in over 140 international motion pictures in a remarkably long, varied, and illustrious career that spanned four and a half decades. Swarthy and burly, usually sporting a thick mustache, and often projecting an air of quiet oily menace, Sambrell was frequently cast in colorful supporting parts as hateful villains and lethal gunslingers in numerous Italian spaghetti Westerns. Sambrell was born Alfredo Sanchez Brell on February 23, 1931 in Madrid, Spain. His family fled Spain because of the Spanish Civil War and he was raised in Mexico. While in Mexico Aldo played professional soccer in the Mexican leagues in Pueblo and Monterrey. After beginning his career in the entertainment industry as a singer, Sambrell eventually returned to Spain and made his film debut in an uncredited bit role as a Jewish rebel in the biblical epic King of Kings (1961). Aldo appeared in his first spaghetti western in 1963. Sambrell was perhaps best known for his gritty portrayals of scruffy bandit gang members in Sergio Leone's classic spaghetti westerns A Fistful of Dollars (1964), For a Few Dollars More (1965), The Good, the Bad and the Ugly (1966) and Once Upon a Time in the Wild, Wild West (1973). Sambrell gave a memorably chilling performance as ruthless bandit gang leader Mervyn Duncan in Navajo Joe (1966). He had a rare lead role as voodoo priest Gatenebo in the laughably lousy horror clunker Voodoo Black Exorcist (1974). Among the many directors Aldo worked for are David Lean, Richard Fleischer, John Milius, Sergio Corbucci, Umberto Lenzi, León Klimovsky, Jess Franco, Richard Lester, Jackie Chan, Charlton Heston, Matt Cimber and Enzo G. Castellari. Moreover, Sambrell also wrote, produced and directed a few films. He was married to actress Cándida López. His last film role was as an aging actor in the poignant short Río seco (2006). Aldo died at age 79 on July 10, 2010 in Alicante, Spain after suffering a series of strokes.

Flesh for the Beast

The Man in the Brown Suit