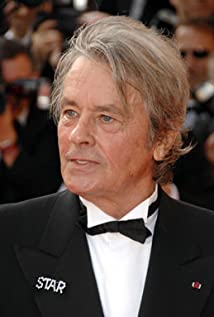 Alain Fabien Maurice Marcel Delon was born in Sceaux, Hauts-de-Seine, France, to Édith (Arnold) and Fabien Delon. His father was of French and Corsican Italian descent, and his mother was of French and German ancestry. His parents divorced early on, and Delon had a stormy childhood, being frequently expelled from school.In 1953/1954 he served with the French Marines in Indochina. In the mid-'50s he worked at various odd jobs including waiter, salesman and porter in Les Halles market. He decided to try an acting career and in 1957 made his film debut in Yves Allégret's Send a Woman When the Devil Fails (1957). He declined an offer of a contract from producer David O. Selznick, and in 1960 he received international recognition for his role in Luchino Visconti's Rocco and His Brothers (1960). In 1961 he appeared on the stage in "'Tis a Pity She's a Whore", directed by Visconti, in Paris. In 1964 he formed his own production company, Delbeau Productions, and he produced a short film directed by Guy Gilles. In 1968 he found himself involved in murder, drug and sex scandal that indirectly implicated major politicians and show-business personalities, but he was eventually cleared of all charges. In the late 1960s he formed another company. Adel Film, and the next year he began producing features. In 1981 he directed his first film, Pour la peau d'un flic (1981).Delon was a sensation early in his career; he came to embody the young, energetic, often morally corrupted man. With his breathtaking good looks he was also destined to play tender lovers and romantic heroes, and he was a French embodiment of the type created in America by James Dean. His first outstanding success came with the role of the parasite Tom Ripley in 'Rene Clement''s sun-drenched thriller Purple Noon (1960). Delon presented a psychological portrait of a murderous young cynic who attempts to take on the identity of his victim. A totally different role was offered to him by Visconti in Rocco and His Brothers (1960). In this film Delon plays the devoted Rocco, who accepts the greatest sacrifices to save his shiftless brother Simon.After several other films in Italy, Delon returned to the criminal genre with Jean Gabin in Any Number Can Win (1963). This work, a classic example of the genre, was distinguished not only by a soundly worked-out screenplay, but also by the careful production and the excellent performances of both Delon and Gabin. It was only in the late 1960s that the sleek and lethal Delon came to epitomize the calm, psychopathic hoodlum, staring into the camera like a cat assessing a mouse. His tough, ruthless side was first used to real effect by Jean-Pierre Melville in Le Samouraï (1967). In 1970 he had a huge success in the bloodstained Borsalino (1970)--which he also produced--playing a small-time gangster in the 1930s who, with Jean-Paul Belmondo, becomes king of the Marseilles underworld. Delon later won critical acclaim for his roles, against type, in Joseph Losey's Mr. Klein (1976) in which he played (brilliantly) the icily sinister title role, and the art-movie Swann in Love (1984). He has an older son Anthony Delon (who has also acted in a number of movies) from his first marriage to Nathalie Delon, and has a young son and daughter, Alain-Fabien and Anouchka with Rosalie.

The Art of Compromise

One Husband Too Many

Asterix at the Olympic Games