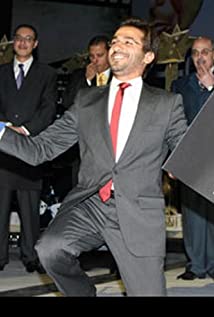 Ahmed Helmy made his first big screen appearance in film Aboud on the Boarder (1999), in which he co-starred alongside Alaa Waley El Din. Ahmed, through his amazing breakthrough performance, and comic sense of humor, nabbed all the attention he needed in this film. He quickly made a jump to starring roles in films such as Omar 2000 (2000), The Headmaster (2000), _El Selem We Al Thoghban_.Ahmed first started his career, when director Sharif Arafah was watching children's programme "Leighb Eyal" on the Egyptian Satellite Broadcast, Sherif found in Ahmed the comedian actor he needed for the starring role in Aboud Ala El Hedoud. He is a 1993 graduate of the Academy of Arts, High Institute for Theatre Art. He believes that the most sophisticated role he had done yet was in the film Omar 2000, especially the scene in which he had to bury a dear friend. Ahmed's idol is his father, he finds in him the idealism, kindness and wisdom. Ahmed also admires Ahmed Zaki for his enormous acting talent. As for the comedy, he adores Adel Emam and Samir Ghanem. Ahmed finds the trend of the cinema today, now known as the "Youth Cinema", can be judged only through audiences. 'After three or four days of screening a film, audiences would know and judge the film to be a success or no, it is a matter of supply and demand, commerce, film is a commodity which applies to the terms of supply and demand'.

Sorry for the Disturbance

She Made Me a Criminal